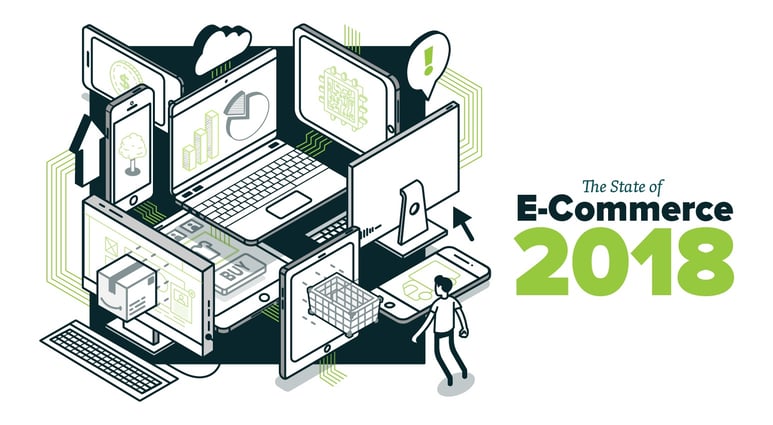 It’s just about time for the President of the United States to deliver the State of the Union Address. The speech is an opportunity to reflect on the status of the nation and outline the priorities for the upcoming year.

In light of this, it’s time to do the same for e-commerce. Let’s take a look at where we stand as an industry, the highlights of the last year, and what changes will be made in 2018.

It’s Amazon Against Everyone Else

After Amazon bought Whole Foods Market in 2017, the simmering anxiety of Amazon’s dominance came to a boil. Large retailers began making aggressive moves to retain their market share. For example, Walmart told it’s vendors to get off AWS, Amazon Web Services, or else. Other companies followed suit. They don’t want Amazon to have any level of access to their data.

Google teamed up with large retailers including Walmart, Target, Bed Bath and Beyond, and more to offer more products on Google Express. This has been called the “Anti-Amazon Alliance.”

In 2018, we’re likely to see retailers strengthening their grasp of market share through further alliances (or acquisitions) and technological innovation.

The Retail Apocalypse Is Exaggerated

For years, headlines have announced the end of retail with doom and gloom. But in 2017, the industry began to see that it isn’t all bad.

Retail is definitely changing and stores are having to rethink their approach to physical stores altogether. It is true that many retailers are shutting down locations and going bankrupt. This rift does cause hardship for the individuals directly affected. But this is the result of retailer’s not keeping up with consumer demand.

Shoppers are looking for for convenient online shopping and novel shopping experiences. The culprit of retail’s demise, e-commerce, is presenting more opportunities to deliver on these demands and consequently increase revenue. Serving customers now requires an omnichannel approach to deliver information, as well as goods and services. Those retailers who are changing their approach to both physical and online retail spaces are reaping the benefits.

It’s not the end, it’s an upgrade.

Big Data is a Big Opportunity

Big data and machine learning are making it possible to make data-driven decisions in every nook and cranny of the industry. From hiring employees to targeting customers, automated and intelligent systems are driving efficiency for those who are embracing change.

In 2018, the largest retailers should mature their big data and data decision making processes. They should also use machine learning technology to personalize incredible online shopping experiences.

Amazon’s monopoly on the One-Click purchase is over. Going into 2018, we’re sure to see more retailers adding this feature to their conversion tool box.

Back in 2002, Amazon and Barnes & Noble settled a lawsuit regarding Barnes and Noble’s alleged patent infringement. Amazon made it clear that they would use legal means to pursue anyone who took this competitive edge.

The One-Click button is sought after as a conversion optimization tool. Clicking just one button reduces the friction in between wanting and buying by getting rid of all the steps required to checkout. We should expect one-click purchases to become a new standard in e-commerce.

Casper, ModCloth, Warby Parker, and more… these e-commerce stores have done the unexpected and opened physical retail locations to showcase their products. The trend isn’t new, but in 2017, it picked up speed.

2018 will be the year we confirm if this trend is a financial and brand win, or a failed experiment.

We Started the Discussion About the Environmental Impact

Vox News reported on the environmental impact of e-commerce. It turns out shipping, and especially two-day and same-day shipping, has a large carbon footprint.

And if the gas emissions of expedited delivery weren’t enough, the cardboard used to ship your products is also an accumulating problem. The New York Times reported “The environmental cost can include the additional cardboard — 35.4 million tons of containerboard were produced in 2014 in the United States, with e-commerce companies among the fastest-growing users — and the emissions from increasingly personalized freight services.”

An article by Retail Wire published on Forbes.com argues that the blame of the e-commerce’s cardboard problem falls on consumers too.

Going into 2018, expect to hear more from consumers on this issues and be more accountable for the environmental impact of online purchases.

The Corporate Tax Rate Will Fall

After the tax bill was signed, AT&T and Walmart both announced they were raising minimum wages and bonuses as a result. Zeynep Ton, author of “The Good Jobs Strategy: How the Smartest Companies Invest in Employees to Lower Costs and Boost Profits” suggests in an HBR article that other retailers also reinvest in their employees noting that “higher pay for retail employees with a set of smart operational choices that leverage that investment results in more-satisfied customers, employees, and investors”

Mobile Shopping Will Finally Have Its Year

During the 2017 Holiday Shopping Season, mobile traffic surpassed desktop. While mobile has been on the rise for years, the 2017 surge of mobile shoppers should be the one to push retailers to prioritize their mobile experience above all others. Shoppers use smartphones in several parts of their journey, they may price check an item while they are in a store, or browse while laying in bed. Retailers still have a long way to go in understanding and optimizing for the unfamiliar mobile shopper, and 2018 should be the year that moves mobile shopping forward.

Leaders Are Connecting to More Devices

As more devices connect to the web, more devices become spaces for commerce. Home Assistants such as Google Home and Amazon’s Alexa are innovating voice commanded purchases. The Home Shopping Network has always showcased its products on TV, and now consumers can buy directly from their smart TV’s as well. 2018 is a chance to see if consumers develop shopping habits via the Internet of things.