An In-Depth Look At How E-Commerce Shoppers Make Decisions 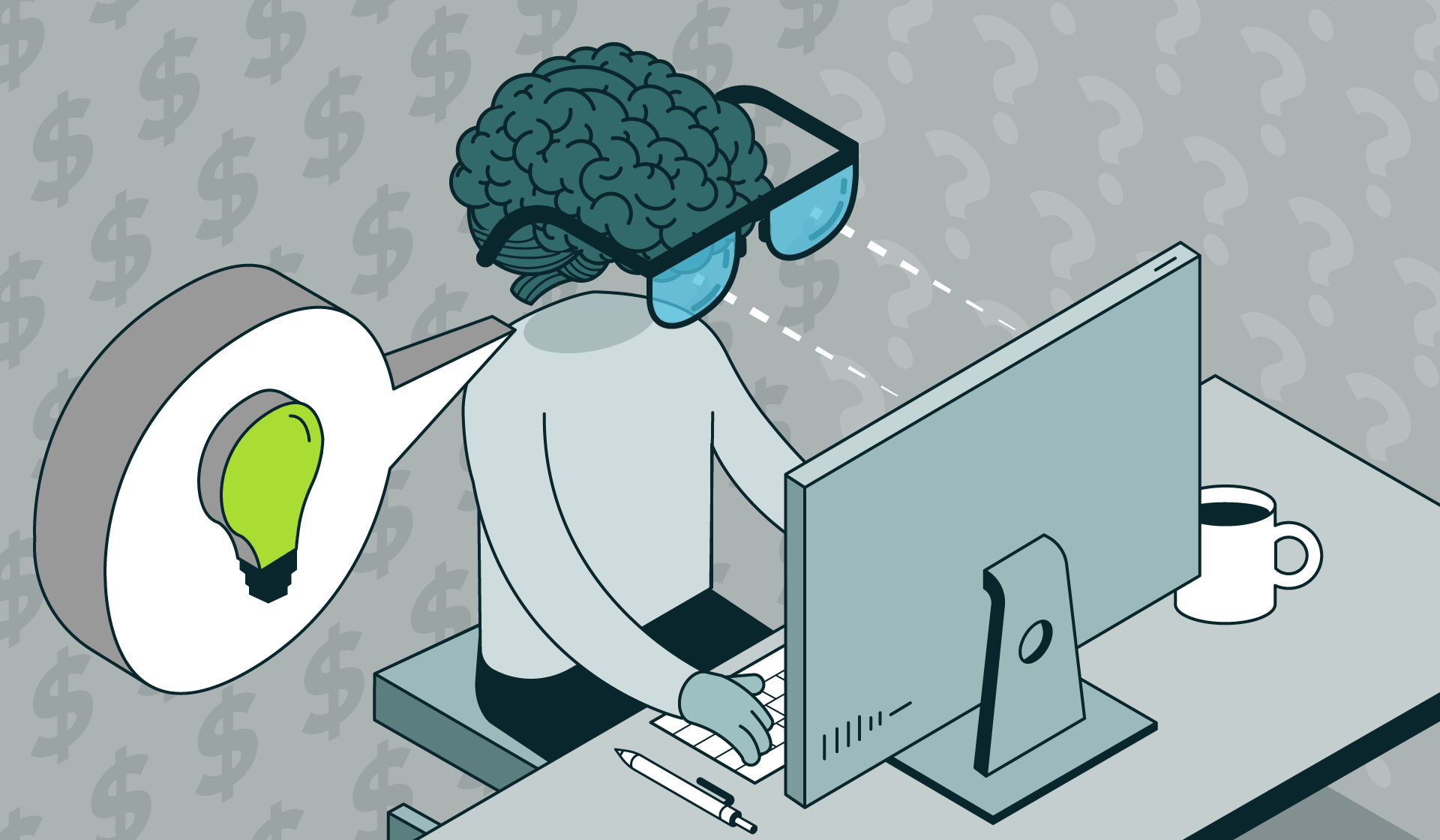 Want to skip to a solution? Start a conversation with our experts today.

The Three Methods of Decision Making

From a cognitive perspective, a conscious decision is a taxing process. It requires a great deal of mental energy to determine whether or not doing something will result in a net benefit. Making good decisions requires having the mental capacity to imagine the proposed decision and accurately construct a future reality based on the outcomes of that decision.

Consider a game of chess or even checkers. The rules confine how many outcomes are possible. But it’s still hard to predict more than a few moves. Within the open-world rule-space of reality, accurately predicting the future consequences of a decision is incredibly difficult.

Note: The concept of heuristic rulesets and analytic observation are based on Epstein’s model of the Cognitive Experiential Self. I’ve slightly modified his model to separate the fight-or-flight response as its own system.

1. If You Don’t Have to Think About It, It’s an Instinctual Reaction

On the other hand, it does a poor job of making complex long-term decisions. Instinct controls the sympathetic “fight or flight” response. It is the “lowest” of the three operating methods because it requires the least conscious processing power to utilize.

When used outside of the context of fight-or-flight situations, instinctive “gut reactions” are generally only relied upon as a last resort when the two higher decision-making processes have failed.

However, when activated, instinct takes precedence over the higher pathways. It’s not going to let you continue doing those differential equations in your head when you need to suddenly focus on the charging bear that appeared from behind a tree. Instinct is generally good at dealing with simple binary absolutes: do this now, or die.

Instinctual reactions are tightly coupled with muscle-memory functions. These functions are similarly low-level cognitive functions (as in they don’t require a lot of conscious thought). When you’re running from the bear, you don’t have time to consciously think about the placement of your feet and the movement of your legs—you just run.

Whereas instinctual reactions are an evolutionary adaptation, heuristic rulesets are developed from personal experiences and passed on through human culture.

Heuristics can be based on analytic observation (more on this soon), but they employ the use of abstraction, generalization, and symbolic representation to quickly recall information without getting caught up in details and nuances.

Individuals develop their own heuristics throughout their lives but can also learn them through culture. Heuristics are preserved in fables, mythologies, social mores, morals, taboos, laws, art, religion, and political ideology. They make up our belief systems and form our high-level understanding of the world.

Heuristics are the optimized shortcuts that allow you to make “pretty good” decisions most of the time. They are the distillation of complex observations into simple trends which become internalized as beliefs.

For example, one such heuristic might be “don’t eat food off the floor.” There is no logical justification for why that rule should apply in all circumstances. You might know that your particular floor is perfectly clean, but the belief that it’s wrong will usually compel you not to put your food there regardless.

Heuristics aren’t based on logic, they are based on simple emotional systems that work most of the time. It’s a lot easier to remember not to eat food off the floor “because it’s gross” than it is to consciously evaluate every floor you encounter to determine whether or not it is safe to eat off of it. It is not a reasonable expectation for someone to have to make calculated inspections of the floor every time they want to eat. Instead, we have rules like “food goes on dishes” and “don’t put dishes in the bathroom.”

These rules allow us to go about our daily lives and perform mundane tasks efficiently without having to spend a huge amount of mental energy to ensure our survival.

Unlike instincts, heuristics are and white. There can be heuristics that make exceptions for other heuristics. As an example, the “five-second rule” is a heuristic used as an exception to the “don’t eat food off the floor” rule. While this may add some complication to the process, heuristics are still orders of magnitude simpler than raw scientific investigation.

By trusting our emotive reactions, we can make decisions without even having to consciously recall the specific ruleset that is producing that feeling. Heuristics are how we navigate the complexities of day-to-day life without consuming the entirety of our cognitive energy on mundane tasks.

3. When You Think About It, It’s an Analytic Observation

Analytic observation allows us to make decisions based on the ultimate truths of nature and reality. It also allows us to regularly check and evaluate our heuristics rulesets in an ongoing attempt to optimize them.

Analytic observation also allows us to construct the frameworks of math and physics that help us understand the defining rules of the universe. The application of that understanding results in scientific and technological progress, and with that comes the hope for universal improvements to our daily quality of life.

It’s easy to see why analytic observation is romanticized today. But since it deals with analyzing raw data, it requires a great deal of cognitive effort to process. For this reason, it is not a good method for making decisions that require quick responses or for performing mundane, low-priority tasks.

Each Mindset has an Activation Threshold

As discussed, each of the three decision-making methods we employ various qualities that make them suited for dealing with different situations.

Notice the priorities of the three methods. The priority doesn’t mean that the problems it deals with are more or less important in the grand scheme of things. It just means that they are more important to your immediate survival and well-being.

Knowing This, We Can Apply It to E-Commerce Optimization

Understanding the situations that trigger various decision-making methods in a consumer can be useful for predicting how they are going to make their decision. It may even be possible to manipulate the scenario to change that. So how do we change that?

Mortality salience is a term used in Psychology that loosely means “awareness of death.” The three decision-making methods outlined above have each been developed as a response to situations with different degrees of imminent mortality salience. When a threat is highly imminent (ie: running from a bear), instinct kicks in. When the threat is obvious but not immediate, heuristics are used (ie: I’m hungry, and apples are good). And when the threat level is lowest, we can make analytic plans to maximize our long-term survival (ie: I should build a shelter before the winter).

By manipulating the perceived imminence of mortality salience we can encourage the activation of these different methods. It goes without saying that putting the consumer in life-threatening situations is highly unethical. If you wish to stay in business, I would highly advise against any such notions! Luckily, there are other ways.

There are mundane situations where a consumer’s unconscious salience of their own mortality can be heightened. For instance, I propose that mortality salience may become unconsciously elevated in the following situations:

Any of the aforementioned situations are commonly encountered during a trip to the mall:

This information could be utilized by retailers in a number of ways.

Firstly, by predicting what decision-making methods a consumer has currently activated, the retailer may have greater success by appealing to that consumer using emotional versus logical means (or vice versa).

Secondly, a retailer may be able to emphasize or minimize aspects of a transaction in order to elicit a quicker decision-making response method or appeal to a slower method if trying to make rational arguments for customer loyalty.

Great salespeople can unconsciously navigate these waters to custom-tailor their pitches to each individual customer’s temperament and situation. They may be operating on heuristics that give them an intuition on how to respond, but no such equivalent currently exists in the online e-commerce world.

It may be possible however to conduct some experiments through Granify’s e-commerce optimization services. It would be interesting to see if we could make accurate predictions of individual customers’ decision-making models and tailor experiences that best match their current state.

For example, if a customer has returned to look at the same product page three times in the last week, we might infer that their decision-making process has become a prolonged rational reaction and that we might be best served by appealing to their logic.